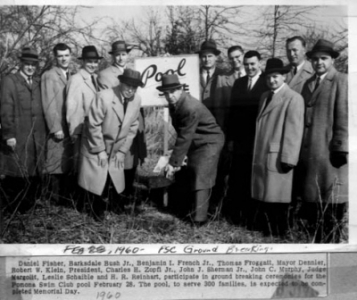 Pomona Swim Club was built on land adjacent to what is now the Footlighter’s Playhouse. According to the Tour and Building

History page of the playhouse web site, this building was the site of the first African American school in Cinnaminson and later served as an elementary school, a school for special needs students and later as the Cinnaminson Board of Education offices.

1960 was the first full season the Pomona Swim Club was open to its members. It was a different time when the population of Cinnaminson was a little over 8,000 residents as compared to almost double that amount currently.

The club was originally designed to serve 300 families and consisted of the main pool.

Surrounding the Pomona Swim Club property is Woods Park. For those who need more space to play, there are playgrounds, basketball courts, tennis courts, baseball, and soccer playing fields.